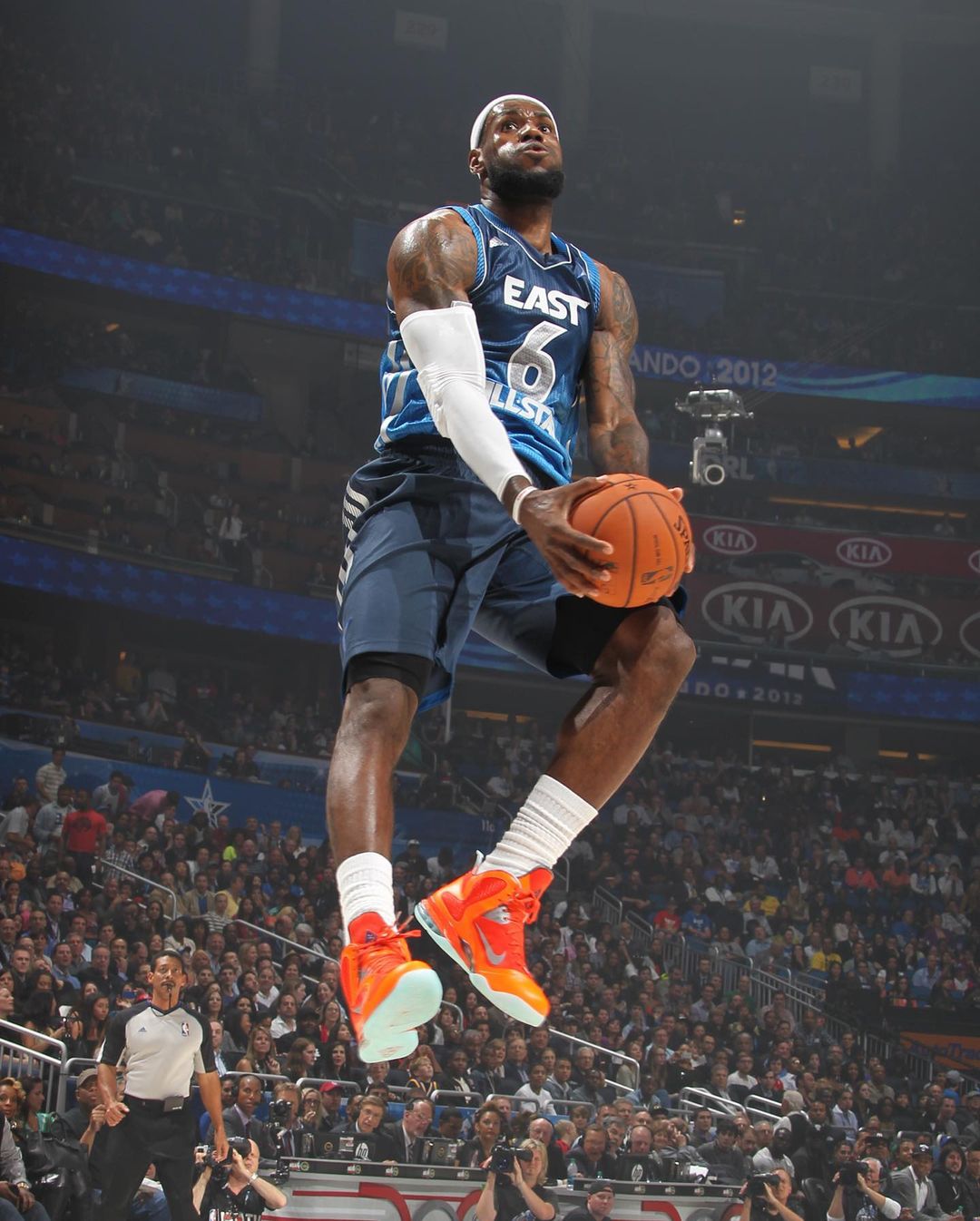 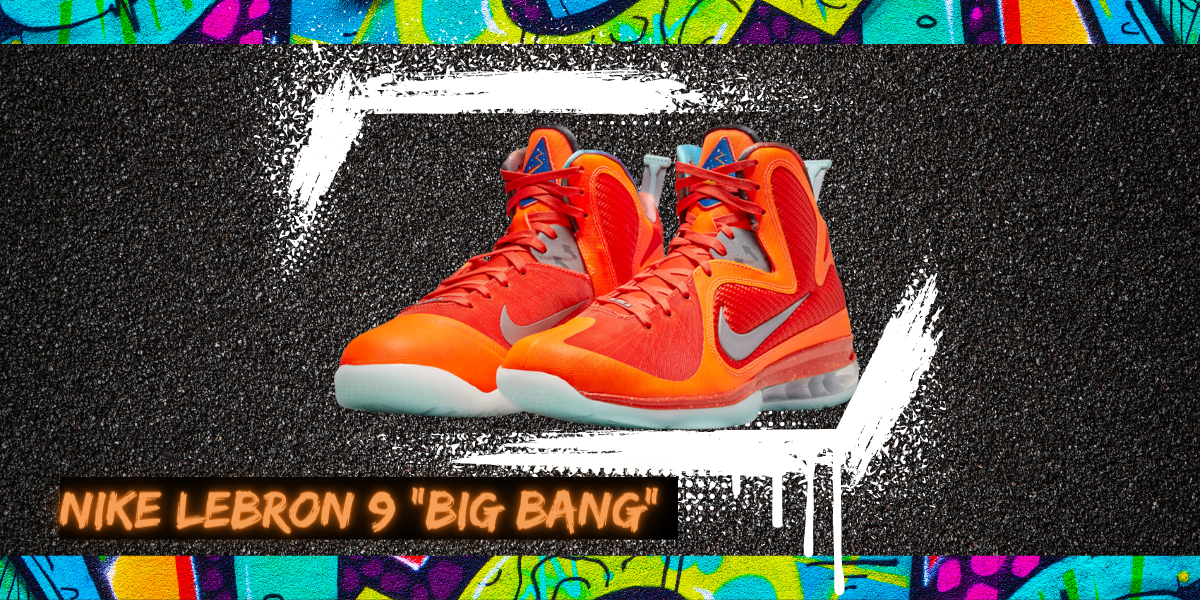 Widely-regarded as one of the best Nike Basketball releases of all-time, the vibrant “Total Orange” and “Team Orange”-colored pair landed onto the scene during 2012’s NBA All-Star Weekend. A nod to the event’s host city of Orlando, FL, home to the Kennedy Space Center, the sneaker indulged in a “Galaxy” theme that also appeared on other footwear of the time, most notably the Nike Air Foamposite One. In addition to the eye-catching citrus arrangement applied across the Nike LeBron‘s mixed materials upper, a handful of reflective “Metallic Silver” details further tap into the space-related theme. Glow-in-the-dark outsoles and a special “Big Bang” logo on the tongue round out the almost-10-year-old sneaker. - sneakernews.com

The LeBron IX “Big Bang” Retro provided to the Johnston Memorial Library was worn by Dr. King when he threw out the ceremonial first pitch September 3, 2022, at the Charlotte Knights inaugural HBCU Night at Truist Field.

One of my most cherished memories is the 1990 New York Mets baseball season. The entire summer, I lived with my grandparents; that season, the Mets played 162 games. I saw at least 100 of those games on WWOR-TV and ESPN. What is also special about that summer is that sneaker culture—for those who subscribed—was in its Golden Age. There were sneakers endorsed by athletes in every sport—including baseball. Celebrities also influenced sales, yet they were not recognized or compensated for doing so. Glowing exceptions are companies like TROOP, LA Gear, and British Knights. They went against the grain and endorsed rappers and pop stars to sell sneakers. They were clearly inspired by Adidas and their 1980s relationship with Run-DMC. During this period, the hardest part about buying sneakers was knowing where to go to get them. Were they expensive? Mostly, they were. Yet, with so many thriving companies, there were brands with respectable products at the most price points. I spent that summer watching the Mets and reading everything I could get my hands on that pertained to my general interests. Sneaker culture literature was virtually non-existent before Bobbito Garcia’s “Confessions of a Sneaker Addict.” That essay—featured in the May 1991 issue of The Source magazine—forever changed sneaker culture. Specifically, it is recognized as sneaker culture literature’s first example. Before “Confessions of a Sneaker Addict,” authentic subscribers largely looked to sports periodicals and catalogs for sneaker references or mentions.

Glued to the television, I noticed that significant figures were invited to throw out the first pitch at baseball games. Over the years, I witnessed presidents, entertainers, business owners, politicians, athletes, and various dignitaries throw out the first pitch. That summer, I decided I wanted to do exactly that—I wanted to throw out the first pitch at a baseball game. In my 13-year-old mind, receiving that honor would mean that I was on a similar path as the individuals I witnessed doing the same. Though I never told anyone I wanted to do this, I would—for years—pay close attention to the ceremonial first pitch. I witnessed the most beautiful one at Yankee Stadium before game 3 of the 2001 World Series. Fresh off 9/11, America was still in grief. That evening, President George W. Bush threw a perfect strike. It not only inspired New York City, but it also inspired the nation. That pitch’s antithesis is 50 Cent’s May 27, 2014, infamous wild ceremonial first pitch at Citi Field. Simply stated, it went WIDE left.

Relating to my childhood dream, last August, I received a call from—you guessed it—David J Butler. He didn’t waste time getting to the thesis. “Doc, are you free September third?” I replied, “What’s going on?” He explained, The Charlotte Knights are having their Inaugural HBCU Night; I’m calling to gauge your interest in throwing out the ceremonial first pitch.” I quickly accepted. The offer hadn’t been formally made, and I quickly accepted. Though I am a 2x HBCU alumnus—with professional affiliations with several other HBCUs—there was no doubt that I would be representing Virginia State University. I decided to wear the Sole Food Brand Trojans batting practice jersey, with the Nike LeBron 9 “Big Bang” in vibrant Total Orange and Team Orange. That pair—and its galaxy theme—became infamous during 2012’s NBA All-Star Weekend. I knew this was a worthy first-pitch combination. So much so that, I procured more comments about my sneakers and jersey than my ceremonial first pitch. Did I get the ball across the plate? Absolutely. Was it a perfect strike? No. However, batters swing at pitches outside of the strike zone daily. Currently displayed via the Johnston Memorial Library, the jersey, and matching sneakers are my reminders that I didn’t pull a “50 Cent” while fulfilling my childhood dream.